Nigerian Politician, Dino Melaye has taken to social media to reveal that youth and women of his community saved his house, from being vandalized and burnt down by hoodlums at Aiyetoro Gbede. 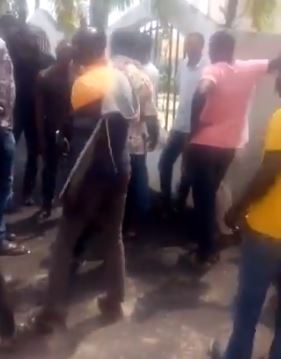 Dino Melaye thanked the youth, women, and security agencies for preventing hoodlums from attacking his house.

According to him, the indigenes spotted the thugs with arms at Obajana junction in 15 buses, ready to vandalize his property and quickly moved in to prevent them from attacking the house.

“My people moved into my house the moment they heard of the evil plans of the thugs to safeguard the place. The thugs had to turn back when they probably heard that my people were battle-ready for them.”

Recall that Dino Melaye yesterday alleged that thugs are going to destroy his home in Aiyetoro Gbede, Kogi State.