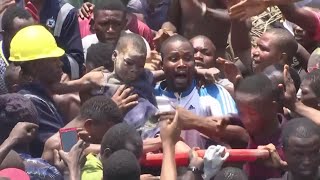 A three-story building, Friday, collapsed in Ebute-Meta area of Lagos.

The cause of the incident, which occurred at No. 95, Abeokuta Street, Cemetery, Ebute-Meta is yet to be ascertained.

But rescue operation has commenced.

A female, aged 30, has been rescued from the rubble of the collapsed building. She was said to have sustained injuries and had been moved to the hospital.

It could not be ascertained if she was an occupant of the collapsed building, but emergency responders said she was rescued with the use of modern equipment called DELSA.