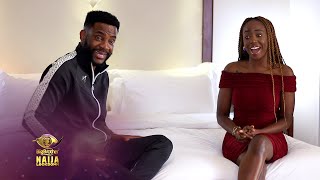 Big Brother Naija housemate, Vee has revealed that she was never in a relationship with fellow housemate Neo, who many thoughts were her lover.

According to Vee, she and Neo are not dating and she no longer wishes to go into a romantic relationship with Neo, even if he should ask her out.

The 23-year-old musician stated that Neo never asked her out, even when she clearly told him to shoot his shot.

She made this shocking revelation after the Sunday night eviction show, in a conversation that ensued between her, Neo, and Nengi.

When Nengi insinuated that Vee and Neo were love birds, Vee bluntly asked her what relationship she was talking about.

A surprised Nengi further asked, “so you people are not in a relationship”.

Vee responded stating that they never dated because her supposed lover never asked her out.

“Upon all the times I said if you wanna ask me, ask me, he didn’t ask me, now time run out”

The Bayelsa born model again asked Vee if she’s interested in dating Neo and Vee responded in the negative.