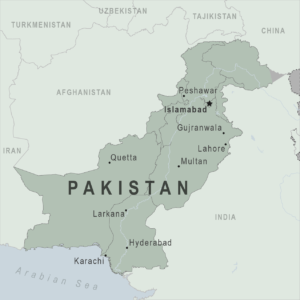 Police in northwestern Pakistan on Wednesday arrested at least 55 suspects in a swoop after a bombing at an Islamic school that killed eight students a day earlier.

The arrests were made from the vicinity of the seminary in the city of Peshawar and suspects were being questioned, police official Mohlat Shah said.

A powerful bomb ripped through the main study hall of the school where hundreds of students were attending early morning Koran lessons after a man left an explosive-filled bag there.

Police were examining the footage from surveillance cameras and interrogating eyewitnesses to identify and arrest the man, officer Shah said.

All except six of nearly 140 students who were injured had been discharged from hospitals, said Mohamed Asim Khan, spokesman of the city’s largest Lady Reading Hospital.

Police and intelligence agencies believed the chief cleric at the seminary, Sheikh Rahimuddin Haqqani, might be a target.

Haqqani, a 42-year-old cleric from the Afghan city of Jalalabad who previously survived two attempts on his life, was said to be close to the Afghan Taliban and being targeted by the rival Islamic State extremist group.

Police have collected all the forensic evidence from the bombing site and are investigating to find out if there was an Islamic State footprint, sources said.

Pakistan officially denies the presence of the Afghan Taliban in the country, but the group’s leaders have been killed in gun attacks in the cities of Quetta and Peshawar.

Around three million Afghan refugees live in Pakistan, some for decades after fleeing the invasion of their country by Soviet Russian forces back in 1979.