Previous Next
Hon. Pally Iriase, Tuesday called for a probe of the Edo State Governor Obaseki over alleged N250billion he collected as revenue in the last four years of his administration.
Iriase who accused the governor of official corruption in a chat with journalists in Abuja also claimed that the Obaseki-led government was characteristic of jackboot politics.

When grilled, the lawmaker told DAILY POST that the figure was obtained from the National Bureau of Statistics (NBS), Revenue Mobilization Allocation and Fiscal Commission (RMAFC) and Federal Ministry of Finance.

But the lawmaker added,

” You will recall that I had in a chat with newsmen at Abuja Airport on 30th December 2019 said that the problem a lot of us have with Governor Godwin Obaseki was that of lackluster performance.

“I also stated that the contrived crisis with Comrade Adams Oshiomhole was a ploy to divert attention from the government’s non-performance.

“However, instead of the Governor taking up the challenge and itemizing his performance across the state, his media minders went on the offensive and dared to insinuate that my position was not based on facts.

“A further attempt to shut me up was an infantile directive to their campaign group in Owan East LGA to announce, albeit ineffectively, my so called suspension from APC.

“I remain a highly reputed founding member and a respected leader of the party and a critical stakeholder in Edo State.

“I have therefore decided to address the press today, in order to debunk the aforementioned insinuation by giving eye-popping facts about the finances of Edo State in the first three years of Obaseki’s government.

“And to enlighten the Edo people to begin to ask relevant questions about the state of affairs rather than accepting the wrong campaign agenda, based on a non-existent but contrived crisis, being set by the Government of Edo State.

“I have set out, in the appendix attached hereto, the net revenue that accrued to Godwin Obaseki’s administration, from Federation Allocation Account (FAAC) and Internally Generated Revenue (IGR), month by month and year by year, in the last three years ending in November 2019.

“From the figures, it is clear that Edo State Government received over N251bn (Two hundred and fifty one Billion Naira) in three years to November 2019. This revenue is net amount after all deductions.

“The figures do not also include 18 Local Governments Funds usually annexed by Edo State Government.

“Edo State has never had it so good in revenue receipts. In fact, since January 2018 to date, monthly revenues have been low of over N7bn and high of over N8bn each month”.

It was on these premises that Iriase scored Obaseki low in his performance as governor. 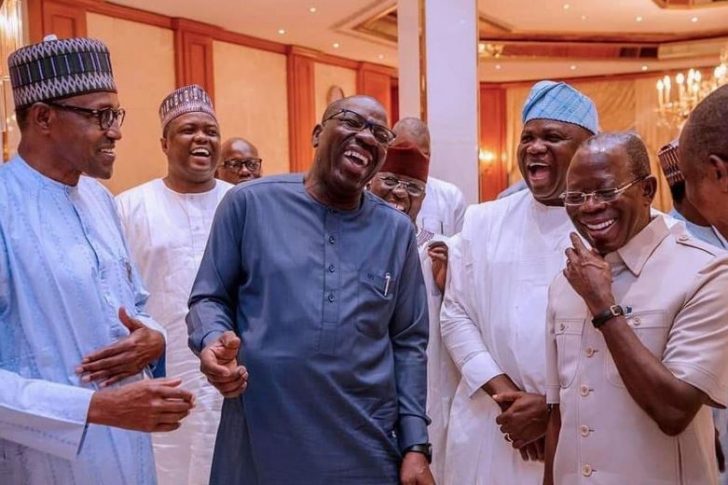 Further, he explained that roads in the state are without drainage while primary schools built by UBEC funds, NDDC intervention projects, CGS-SDG projects were only repainted by the governor.

He also scored the state government low in healthcare services, infrastructure, education and alleged among other things that payment of salaries, which is a major component of recurrent expenditures was restricted in total, by policy to less than 30% of revenue.

“Instead of the Governor to deliberately halt the ongoing plunder, he has resorted to jackboot methods to repress enlightened people of Edo State from voicing out their frustrations.

“This is why it is only from Obaseki and his hirelings that we hear of the contrived crisis in Edo State”.