Enyimba International has confirmed the abduction of their player Dayo Ojo by gunmen along the Benin-Owo expressway.

The incident occurred on Sunday when the player was travelling to Akure following the suspension of the Nigerian Professional Football League because of the COVID-19 pandemic.

Ojo was in the company of teammate Emmanuel James and another professional football, Benjamin Iluyomade who was also abducted while James managed to escape the attack.

Enyimba is in close contact with the player’s family and efforts are being made to secure his release. 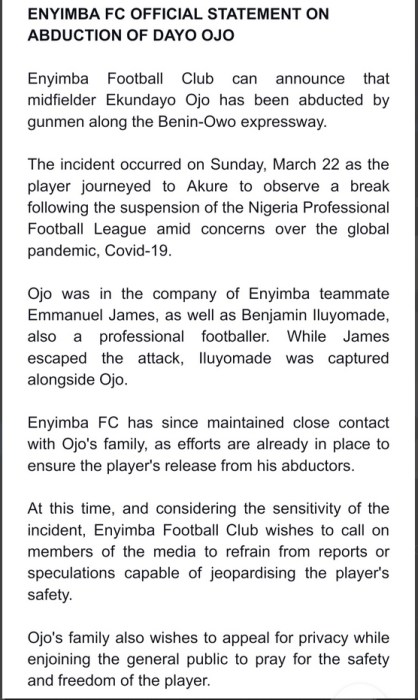 Dayo Ojo’s kidnap comes on the heels of the death of another player who was killed in a car crash on the same day.

Ifeanyi George, who played a few games for Nigeria in 2017, was killed along with club teammate Emmanuel Ogbu when their car collided with a parked truck in Edo state.

Their deaths were announced in a statement from their club, Enugu Rangers. George was 26. Ogbu was a member of the club’s youth team. A third man who was in the car and who was not a soccer player was also killed.