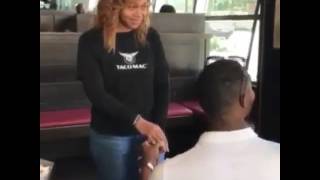 After getting on one knee, the girlfriend who was all smiles was surprised when she saw her side dude walk into the restaurant. It was then she found out that they had planned the whole thing and ordered them out of the restaurant.