Bose Olasunkanmi, the woman allegedly used for fake miracles by some pastors in viral videos, shares her story with Afeez Hanafi. 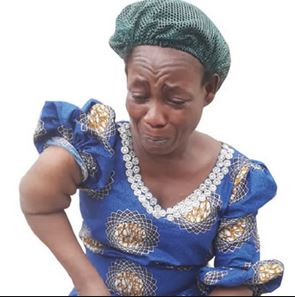 Where are you from?

I hail from Ilesa, Osun State.

How old are you?

What religion do you practise?

I am a Muslim.

What is your educational background?

I attended Nawarudeen Primary School. I finished primary school in 1988 and came to Lagos in 1989. I lived with my mother before she died in 1990.

When did you start faking miracles for churches?

After my mother’s death, I started working with a food vendor.

I worked there for nine years. In 1999, I had an accident and my leg and right hand were affected. The food vendor I was working with could no longer engage me because of the injuries.

I then went to my sister’s place in Igando and I stayed with her from 2000 to 2003 when I met my husband. He married me with the injuries.

We had three children together and he died on October 3, 2017. There was nothing for me again. No helper and no house for me to stay. I relocated with my children to my sister’s shop where we were living.

It was at the shop I met a girl called Fatila Musa. I begged her for money and she gave me N1, 000. She saw my hand and said if she took me to some churches I would make some money.

She left and returned in September 2018. She then took me to a church in Ogba, Lagos.

What is the name of the church?

The church is Radiant Army Deliverance Ministry; I know the pastor as Tony Anthony.

How did you get to be used for fake miracle when you met him?

Before Fatila took me there, she taught me how I would act when we got to the church.

We did the rehearsal at home. She taught me how to first hang my hand.

He asked me if I believe my hand could heal and I said yes. Meanwhile, the girl had already sent my picture to him and he already knew what he wanted to do.

He put a towel on my hand and prayed. He put oil on the towel to rob my hand. Immediately he removed the towel, I started putting down my hand gradually (she demonstrated).

Fatila gave me N9, 000 when we left the church. Three days after, I returned to Pastor Tony Anthony’s church on Sunday. The pastor asked me to come out and he told the congregants that he helped me with N1m.

But he didn’t give me anything. If he had given me N1m that day, I would not have gone to any other church again.

All the pastors were already aware of the whole thing and she was the coordinator.

We would do rehearsals and she would send videos to the pastors. I would bring down the hand as they started praying for me. They knew everything was arranged because the girl had told them already.

Where else did you do the fake miracle?

I didn’t see the girl again until August 2019. I followed her to Port Harcourt (Rivers State). She took me to two churches.

One of the pastors did his own (fake miracle) at a market. She also took me to a church in Abakaliki (Ebonyi State).

In October 2019, she took me to the Mountain of Liberation and Miracle Ministry at Ojodu-Berger which is the last church I went to. The name of the Pastor is Chris Okafor.

As I sat in the church, the pastor called my name and I went out. I have never seen him before but Fatila had already given him all the details.

She gave me N10, 000 after we left the church, Fatila called me and said one brother Henry from the church would give me N400, 000. She later sent Henry’s mobile to me and I called him.

Henry asked me to send him my account number and I did. After some days, he sent N400, 000 into my account.

Why did Henry send the money to you?

He said I should not be involved in fake miracles again.

In your encounter with Pastor Okafor, he said your hand paralysed after you fell from the bed whereas you claimed you had an accident. Who is telling the truth?

I don’t know how the pastor came up with all he was saying about me when I was in his church. Maybe it was the Fatila that told him to say all those things.

Why didn’t you refute his claim?

What am I going to say? It is yes I would say. Why will I say no inside the church? I cannot say no because the girl (Fatila) has arranged everything.

After the service did you meet Pastor Okafor one-on-one?

No. There was no meeting. I left after the service. I didn’t discuss with the pastor; it is the girl I knew.

How much did you make from Port Harcourt and Abakaliki ‘miracle’ crusades?

The pastor in one of the two churches Fatila took me to in Port Harcourt is called Pastor Godswill Abbey.

Did you regret your action?

If I knew they would put my videos on the social media, I would not do it (the fake miracle).

It is poverty that pushed me into it. When my husband died, I could not use my hands to do anything.

I am a widow; there was no helper for me. If I knew it would lead to this, I would not have followed the girl (burst into tears).

My father has a stroke and my mother is dead. I lost one of my children and the remaining two live with my sister.

When your children heard about your plight, how did they feel?

Did they know you were going to churches to fake miracles?

Can you recount all you said before Pastor Okafor and others who performed ‘miracles’ on you?

Yes. In fact, I am ready to take the police to all the churches because I am tired.

All the pastors should be arrested. I can confront them with everything I just said.

They cannot deny that they don’t know me.

I know I have made a mistake doing this, but I am tired. I regret doing what I did.