Zlatan while revealing how much he loves the ‘Skelewu’ crooner stated that he loves him more than Chioma.

He made the comment in reaction to the certificate which was presented to Davido by Sony for selling over 2 million musical copies.

He made this known via a post he sent out on his instastory on Tuesday, 11th February.

See The Photo Below: 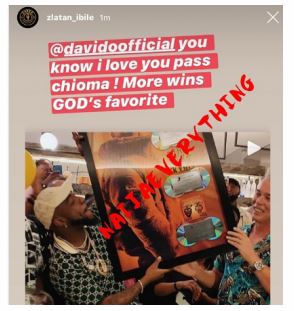