As the #EndSARSProtest proceeded across Nigeria, some Nigerians joined the public expression of discontent at the unprofessionalism of the Nigerian Police Unit, Federal Special Anti-Robbery Squad (FSARS), by signing an online petition.

The number of Nigerians that have signed the petition on Change.org, as at the time of filing this report were 3,464. 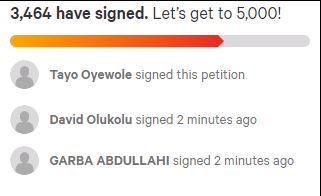 The description of the petition reads; “We call on the total disbandment of the SARS unit of the Nigerian Police Force due to its continued human rights infringement, extrajudicial killings, unchecked high handedness, targeted harassment and so many other unprintable crimes.

“We acknowledge the function of a special unit within the Nigerian Police Force, but it has become common knowledge that the name “SARS” and “FSARS” have been affiliated with prejudice and terror.

“We strongly believe that there are other investigative and intelligence-driven methods that can be employed by officers of the police force in tracking crime instead of the archaic method of prejudice and unwarranted aggression.”

Another signee by the name Festus Ehijene Joseph said; “We are been oppressed in our own country by the people we pay to protect us. Our brothers are been killed without any action from the government to penalize the ones involved.

“SARS is nothing but Legalized ARMED ROBBERS. Put an end to them. This is the final time we will be asking this. ENOUGH IS ENOUGH

The name SARS usually sent cold shivers down the spines of criminals who saw the unit not just as an antidote to their atrocious acts, but as capable of sending them to their graves at the snap of the finger, according to an analysis by District Tv crime reporter, Evelyn Usman.

A new wave of protest and clamor for the closedown of the unit started a few days ago. Inspiring the protest was among other things a video showing the personnel of the unit shooting a young man in Ughelli Delta state.

The video according to the Nigeria Police Force (NPF) was doctored, as it was not the true representation of the incident.

The videographer, Prince Nicholas Makolomi, was trailed and arrested by the police. This also caused outrage from different quatres. In his reaction to the videographer’s arrest, the Minister of State for Labour and Employment, Festus Keyamo, said the police were “chasing shadows” as the young man’s action was patriotic.

Telling his side of the story, Makolomi said; “After the boy (Joshua Ambrose) was arrested on that Saturday, he was kept at the passenger’s side of the car behind the front seat.

“While we were driving in our car behind the police vehicle and that of the boy, suddenly the boy jumped from the car and fell on the roadside after which we chased after the police car while making the video.”

He, however, denied being the mastermind behind other videos showing policemen shooting at unarmed civilians in the false representation of the Ughelli incident.

In response to the public outcry, the Inspector General of Police, IGP Adamu ordered the FSARS to desist from routine patrol; and stop and search on Nigerian roads.

It is, however, worthy to note that the Federal Government, three years ago ordered a probe into rights abuses by security forces but did not release its findings to the public.

Condemning the actions of the Nigerian government in the handling of FSARS brutalities incidence, and the order given by the IGP, the Amnesty Internation in a press statement stated; “This is yet another lame attempt to rein in this unit of the Nigerian police which is notorious for the widespread torture and other ill-treatment of Nigerians,”

“We have seen from bitter experience that past investigations into violations were either never carried out or marred by irregularities,” said Osai Ojigho, Amnesty’s Nigeria director.